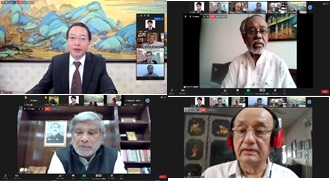 Planning Minister M. A. Mannan today (Monday) said that Bangladesh has no possibility of being entrapped by the Chinese debt trap or loan trap as the amount of the country’s loans in comparison to the GDP (Gross domestic product) is very low and the foreign reserve fund or remittance is being increased day by day.

The minister made the comments while addressing a webinar on the “72nd Anniversary of the Founding of the People’s Republic of China and 46th Anniversary of Establishment of Diplomatic Relations between Bangladesh and China” as the chief guest.

“Look at our debt to GDP ratio, there is no scope of trap here. Look at the huge reserve we are building up. If we are trapped, how can we sit on a mountain of reserve?” Mannan asked.

Referring to the comments of former Bangladesh’s ambassador to China, Munshi Foyez Ahmed, the minister marked the rumor of ‘loan trap’ as one kind of propaganda, spread by some vested interest groups.

He claimed that before borrowing any loan Bangladesh thinks very well about its capability. “We never fill our mouths with the amount of food that we are not able to digest.”

Addressing Bangladesh-China diplomatic ties based on excellent understanding and solid basis, he opined that both states are very good friends and will work together.

He thanked China for its tremendous services at many big development projects in Bangladesh including the country’s ever-biggest river bridge over the river Padma.

Referring to the COVID-19 pandemic situation, he highly appreciated the role of China worldwide in mobilizing its pandemic vaccines to the mass people without making any differentiation and discrimination.

Meanwhile, the minister urged Beijing to take necessary initiatives for returning the stranded Bangladeshi students to China who are studying at different Chinese universities and other academic institutes.

Nearly 10,000 Bangladeshi students have been stranded in their home country since 2019 due to the global pandemic.

A few weeks ago hundreds of those students also held a human chain and demonstrations in the capital Dhaka over the issue.

Chinese diplomat, Hualong Yan, at the webinar, however, replied that China is heartily working on this issue and assured that instant after improving the pandemic situation at a satisfactory level, Bangladeshi students would be returned.

“Till now, a single student from any country has not been returned to China due to the prevailing pandemic situation. Once the COVID-19 situation improves, we will arrange for the backing of all Bangladeshi students,” Yan assured.

Addressing the Chinese civilization as one of the world’s most ancient civilizations, Kamal, focused on potential sectors of Bangladesh-China bilateral ties including trade and business.

The webinar was concluded by Munshi Foyez Ahmed with the vote of thanks to the participants and pointing to the factors, playing a pivotal role behind the tremendous progress of China. “China has been working for people and the tremendous efforts to meet the needs of people have also helped China to make miraculous progress.”