What is Camouflage?  The word Camouflage is originated from the Parisian slang term Camoufler which means “To Disguise”. This is a natural phenomenon that is used by animals & plants to amalgam themselves into the nearby environment. It refers to the use of a combination of materials, illumination, or coloration, by taking the help of pigments & physical structures of animals & plants to disguise themselves as per their surrounding color and also to avoid detection.

Military Camouflage: Following the Camouflage phenomenon of plants and animals militant has also started to wear uniforms with Camouflage patterns so that they can easily disguise themselves into the nearby environment and also can hide from the opposition teams. The French army began employing artists to paint their artillery and observation posts in the same patterns as the forest during World War One. Since that time, military organizations around the globe have invented hundreds of different camo patterns to give their troops a tactical advantage.

Depending on The Natural There Are Multiple Types Of Camouflage:

Brushstroke Camo: Brushstroke Camo was first used by British paratroopers in World War II. It was developed by painting different swaths of colors over the khakis with large brushes. Being inspired by this, other European countries such as Belgium & France also started doing their versions of camouflage in the 1950s and 1960s. And so Brushstroke camo is also called one of the grandfathers of camouflage. This camo pattern can still be found in countries like Pakistan or Zimbabwe.

Tiger-Stripe Camo:  Tiger-Stripe Camo, known as the “cousin” of the Brushstroke camouflage pattern, was developed by the Vietnamese, to meet the unique needs of US troops, in the 1960s. This pattern is a variation of Brushstroke which was inspired by the French Lizard design. Particularly effective in the bamboo-rich rainforests of Southeast Asia, this pattern has a striped overlay of blacks with browns and greens. Due to the pattern’s unique look & effectiveness, it became popular worldwide. At present, armed forces of the Philippines & Thailand, are still wearing them. 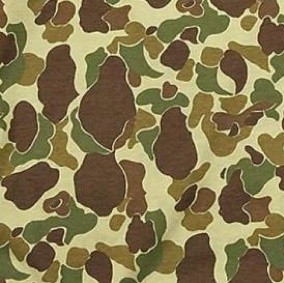 Duck Hunter Camo: Duck Hunter Camo is an American camouflage used by American troops in the Pacific Theatre during WWII. It was originally known as US M1942 spot camouflage. It was a favorite camo for the US from the 1960s through the 1990s but lesser-known patterns in Europe. Duck hunter has a solid background color with large splotches of at least two other colors overlaid on top. Its descendants can be found in Asia, but also Latin- and South-America. The Australian DPCU is also considered a “relative”. This pattern is also known as Frog-skin Camouflage.

Flecktarn Camo: Flecktarn Camo is a German camouflage pattern first used by German troops in the late 70s. This camo pattern was the winner of Bundeswehr Truppenversuch 76, a West German Army contest for designers. The leopard-like pattern became very popular in European countries and also led to several similar designs in Belgium, China, Denmark, and Poland. But it remained unacquainted in North America.

Splintter Camo: The Splinter Camouflage pattern is an innovation of the German Air Force used by German Bundeswehr and Bundesgrenzschutz during WW2. This camo defines the angular geometric shapes as looking like splintered glass. The design may look like an Ikea shower curtain. This camo design was being used in Switzerland used it until 1955. Besides, there are several variations in Bulgaria and the Swedish M90 is the most modern variant today. 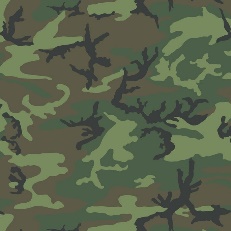 ERDL/Leaf Camo:  ERDL camouflage pattern was designed by the US Army Engineer Research and Development Laboratory (ERDL) in 1948. It is a forest pattern imitating the browns of leaves, the greens of the grass, and the blacks of twigs and branches and so it is also known as LEAF. This pattern synonymous with the Vietnam War also influenced several other patterns. US M81 Woodland (60% enlarged version) is a direct descendant of the camo. This is why ERDL is the grandfather of all camouflage patterns in the latter half of the twentieth century.

Rain Drop Camo: Rain Camo is a German camouflage pattern used by The German Airforce during WW2. Inspired by grass, this camo combines stacks of vertical lines against a solid background to create the image of falling rain. This camo is highly effective against night vision devices, later it became a standard issue for many countries in Central Europe. A few years ago, Rogue Territory brought the pattern back with a series of pants and shorts. This is also known as Water Drop Camouflage. 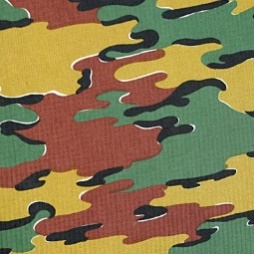 Woodland Camo: Woodland Camo is an American camouflage pattern used by almost all American Armed Forces as a Battle Dress Uniform from 1981 through 2006. This is a 4-color design created by a modified ERDL pattern and enlarging it by 60%. And the most surprising fact about this camouflage pattern is that it is still being used by almost a quarter of all militaries around the world.

Chocolate Chip Camo: Chocolate Chip Camo was first used by the US Army in the First US Gulf War in 1981. This is a six-color pattern like the subtler version “Three Color Desert” and so also called “Six Color Desert”. The name Chocolate Chip comes from the black spots designed to mimic rocks that give the pattern a cookie dough look. This camo pattern is a favorite for desert warfare. It has been used by militaries of countries like Iraq, Africa, and South-Korea.

Disruptive Pattern Material (DPM) Camo:  Disruptive Pattern Material (DPM) Camo was first used by the British armed forces in World War II and has been a standard camouflage pattern both in woodland and desert from the late 1960s until 2011. This camo was designed with pattern disruption in mind, as per its name. This pattern makes the outline of the wearer more difficult to see and so works well in a variety of terrains and settings. DPM is one of the most popular camo patterns that remained in service until the implementation of MTP. Some reserve units still use the pattern. 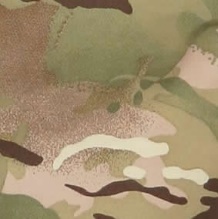 Multi-Terrain Pattern (MTP) Camo: Multi-Terrain Pattern (MTP) Camo is a British camouflage pattern, used by British armed forces since the replacement of Disruptive Pattern Material (DPM) camo in 2011. This camo is designed to provide versatility to UK troops for missions around the globe, in a wide variety of environments & settings, by traditionally mixing various colors and shapes. Though MTP is not a digitized pattern, with MARPAT, CADPAT, & MultiCam, this camo pattern is an international success, succeeded in vastly different environments including UK, Cyprus, & Kenya. Currently, this pattern is being used by the militaries of Malta and Tonga. 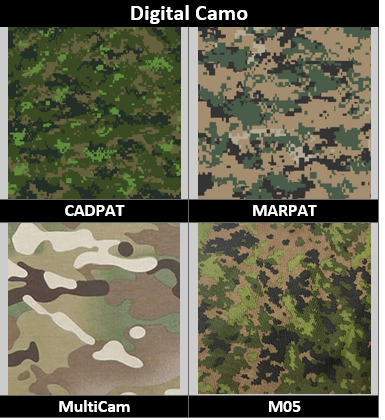 Digital Camo:  The camouflage patterns which are created combining micro & macro patterns based on computer & algorithm, are known as Digital Camouflage. The function of Digital Patterns is to provide military camouflage over a range of distances – as large patches of color work well for long-range and small patches at short range, but neither scheme worked well at all ranges. And so Digital Camo combines both micro & macro patterns. There is a wide misconception that Digital Patterns need to be necessarily pixelated camouflage, but in reality not all multi-scale patterns are pixelated, and not all pixelated patterns combine micro-and macro patterns. The idea of Digital Camo was created by US Army Officer Timothy R. O’Neill in 1970 and Battledress in digital camouflage patterns was first designed by the Canadian Forces (CADPAT) in 2002. CADPAT, Vegetato, Multicam, AOR-1, AOR-2, EMR, M05, MARPAT, Abu, etc are few examples of digital camouflage.