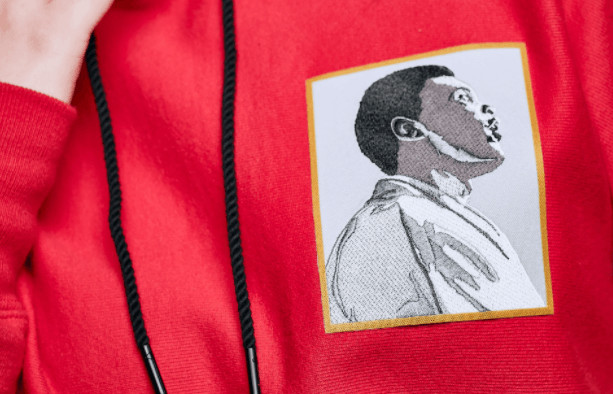 Champion, makers of authentic athletic apparel since 1919, and Muhammad Ali Enterprises, today dropped the second, limited-edition capsule in Champion’s Muhammad Ali Collection. The capsule’s new designs and fresh colors are fabricated to evoke the ethos of the sports legend during his inspirational gold medal win during the 1960 Games in Rome as an 18-year-old.

“I am the greatest, I said that even before I knew I was”

With details based on the 1960 Games historic location and team uniforms, the apparel features unique athletic accents, iconic silhouettes, luxe fabrics and voluminous draping. The men’s and women’s collections, which retail from $35-$125 in the United States, spans sizes XS-2XL and includes Reverse Weave® hoodies, quarter-zip pullovers, joggers, shorts, graphic T-shirts, crop tops, bike shorts, hats and special satin boxing robe. The pieces have legendary quotes from Ali, including “I am the greatest, I said that even before I knew I was,” along with Games-inspired brand decals.

“Muhammad Ali was an artist in the ring and a champion of the people outside of it, inspiring his fans across the globe to be their very best,” said Jon Ram, group president of global activewear for HanesBrands. “The second drop in this collection allows everyone from professional athletes to backyard sports enthusiasts and culture curators to truly be their own Champion by finding the joy in dressing for self-expression and feeling confident while being comfortable.”

The second drop in brand’s multi-year partnership with Muhammad Ali Enterprises, owned by Authentic Brands Group (ABG) in conjunction with Lonnie Ali, a trustee of the Muhammad Ali Family Trust (MAFT), includes global integration across Champion’s brand platforms. The collection is being distributed via Champion.com and Champion retail stores with distribution in the United States, Europe, Asia, Mexico and South America. A third drop is scheduled for later this year to be followed by additional capsules in 2022.

“Ali would say: ‘Champions aren’t made in gyms, champions are made from something they have deep inside them – a desire, a dream, a vision,’” said Katie Jones, senior vice president, entertainment, ABG. “This partnership continues to honor what was most important to Ali during his lifetime.”

To celebrate the second drop of the Muhammad Ali Collection, Champion will be making a donation to the Louisville, Kentucky-based Muhammad Ali Center, a non-profit museum and cultural center dedicated to honoring the man that meant so much to so many.