Traditional textile products are now becoming obsolete day by day. On the other hand, people are more often getting interested in technical textile products. So the designers are now focusing on developing various multifunctional properties (like antimicrobial, antistatic, super hydrophobic, anti-crease, self-cleaning, UV-protecting etc.) in textile products. In the past, different kinds of synthetic chemicals were used to develop these functional properties in textile products. However, the world is moving forward to natural products rather than synthetic chemicals. So scientists from around the globe are studying and conducting the test on different types of natural products to use them as a functional finish on textile goods.

Shrimp is a very common crustacean, and most of us have consumed it at least once in our lifetime. Shrimps are closely related to lobsters, and they also contain a hard shell-like protective layer around their body. Shrimps are primarily found in salty water, and they are around 3-5 cm long in size. In our southwest coastal area of Bangladesh, many farmers are doing shrimp farming in artificial salty ponds. Shrimps are being exported as frozen seafood in various countries around the globe. Around 200,000 tons of shrimp were exported during the 2018-19 financial year, and the export was about $507.3 million. Bangladesh has a good reputation in the shrimp export market, and it brings a vast amount of foreign exchange every year. That is why the shrimp is also known as the white gold of Bangladesh. However, shrimp shells are considered waste in shrimp processing plants. The weight of the shrimp shell is around 35% of the total weight of the shrimp body. So we can probably assume that the shrimp processing plants produce a massive amount of waste materials. The main contains of shrimp shells are protine, Calcium carbonate (CaCO3) and chitosan (C56H103N9O39) polymer. The protein content was found to vary between 33% and 40% of the dry weight, the chitin content ranged between 17% and 20%, and the ash content of dried shrimp shells was found to be relatively constant with an average value of 34 ± 2% of the dry weight and consisting mainly of calcium carbonate (CaCO3). Chitosan has an antimicrobial property that prohibits the shrimp shell from being attacked by microbes easily. However, this antimicrobial properly is in the eye of the apple for the scientists. Chitosan is now being used as a functional finish for textile products. Chitosan has various multifunctional properties like antibacterial, anti-wrinkle, antistatic properties. So the shrimp shells can be a good source of chitosan, and it will help the shrimp shells not be treated as totally waste material.

Collect and dry the shrimp shell

This is the most important part of the chitosan extraction process where various chemical reactions occur. The shrimp shell power obtained from the previous section was soaked in 1M NaOH for 24 hours. After that, they were washed out with distilled water and again dried in a vacuum chamber. Then 1M HCl solution was used to remove the minerals from the shrimp powder. After that, the powder was deproteinized using 1 M NaOH solution. However, the chitosan has a naturally red tint in it. So we need to remove the natural color from the shrimp powder. In order to do that, we use KMnO4 and Oxalic acid together for the discoloring process. After that, the chitosan should go through a deacetylation process by using 50% NaOH. This process should be repeated several times to obtain a higher degree of deacetylation in chitosan. 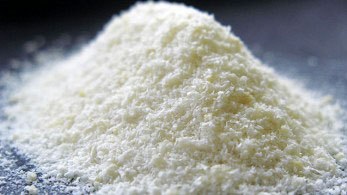 Application of chitosan in Technical Textile

Chitosan in antibacterial finishing of textiles

Microorganisms can easily attack and damage natural fibre-based textile products under damp conditions. This may cause disease transmission and can be threaten for human health. So antibacterial finish for textile products is now becoming popular around the world. Chitosan can be an excellent alternative to the synthetic chemicals used to ameliorate the antibacterial property of textiles. There is two way to use chitosan as the antibacterial finish for the textiles. First, we can apply the chitosan to the fabric’s surface and fix it using cross-linking agents and catalysts. For example, we can use citric acid as a cross-linking agent and sodium dihydrogen phosphate as a catalyst to graft chitosan on the fabric’s surface. Then we use UV irradiation to fix them in their place. In the other process, we can use the chitosan polymer to make a thread called chitopoly with high antibacterial properties. Then, we can use this thread to make a textile product with antimicrobial properties.

Chitosan in anti-wrinkle finishing of textiles

Natural fibres such as silk, cotton, and hemp have low wrinkle resistance properties and low elasticity and cause wrinkling and irreversible deformation. So any external or internal mechanical force can easily damage their aesthetics and comfort. However, the anti-wrinkle properties of the fabric can be improved using fibre modification, changing the fabric structure, fibre blending or finishing. For example, we can use chitosan as the anti-wrinkle finish for textile products specially made of natural fibres. The fibre micro-pores are filled with chitosan macromolecules, which establish a significant number of intermolecular hydrogen bonds between the hydroxyl and amino groups of chitosan and the polar residues of the fibre molecules. As a result, the amorphous portions of the fibres are strengthened, and their mobility is reduced, giving the fabric wrinkle resistance. Thus we can develop wrinkle resistance properties in the fabrics by applying a chitosan finish.

Chitosan in textile dyeing and finishing

Chitosan was first employed in the textile industry as a color deepening agent. Because it is a cationic polymer, chitosan is an excellent fixative for anionic dyes. Using chitosan in combination with other ingredients allows for salt-free coloring. The level dyeing effect of chitosan can be explained by the fact that chitosan causes a uniform layer to form on the fiber’s surface. It improves the fiber’s surface characteristics and minimizes Coulomb repulsion between the fiber and anionic dyes, resulting in a significant increase in dye uptake rate. The protonation of the free amino group on the chitosan molecule in acidic circumstances also contributes to the deepening effect.

Chitosan in antistatic finishing of textiles

As polyester textiles are prone to static electricity, they cause garments to stick to the skin. Antistatic clothing is necessary for industrial-industry employees who operate with sensitive electronic instruments. As a result, antistatic fabric finishing is becoming a popular topic in the textile business. Because NH3 + is included in the molecular structure of chitosan, chitosan-finished fibers have an ion-conducting function in water, allowing static charges created by friction to be promptly released. Meanwhile, when the chitosan molecule’s charge is opposite the fibre’s surface charge, electrical neutralization occurs. Furthermore, the presence of a significant number of strong polar groups on the chitosan molecules, such as hydroxyl and amino groups, renders the chitosan molecules highly hygroscopic, generating a continuous water film on the fiber’s surface. This water coating can dissolve carbon dioxide in the air and electrolytes in the fibers to some extent, improving the fabric’s electrical conductivity and giving the polyester fabric antistatic qualities. 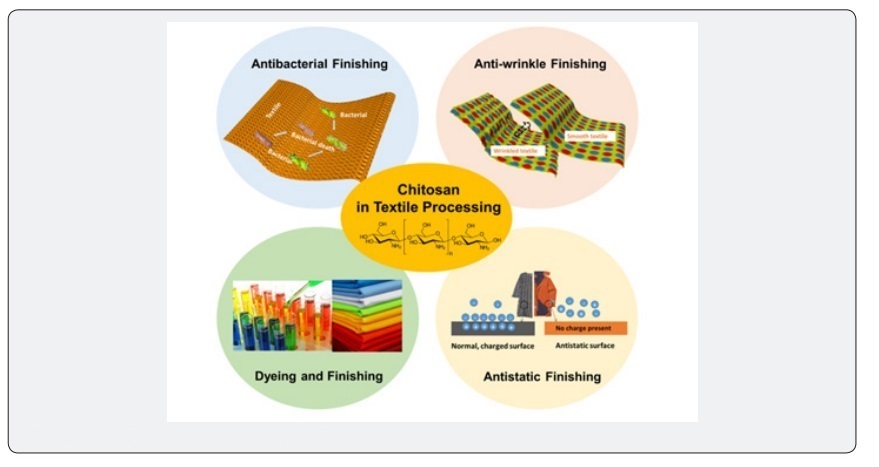 Shrimp is considered as the white gold of Bangladesh. Every year a large amount of frozen seafood is produced from shrimp. So, a large shrimp shell is also formed as waste material. However, these shrimp shells are a perfect source of chitosan, which can be utilized to produce chitosan in a lower cost. Chitosan has huge potential to be used as a functional finish in the textile sector. The world is developing day by day. The textile industries are also going towards modernization. Various properties are now being added to textile goods to make them more productive. Chitosan has different multifunctional properties like antibacterial, anti-wrinkle, antistatic properties. This article tried to explain the importance, extraction process, and multifunctional properties of chitosan. Scientists worldwide are working on chitosan, and they have reported using antimicrobial coatings to create antimicrobial fabrics.