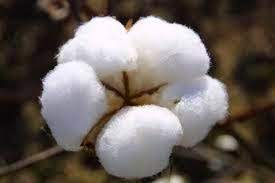 Bangladesh’s Ready-Made Garments (RMG) Industry is an extremely important growth-driver and has been since it began to flourish in the 1970s as a consequence of the International Multi-Fiber Agreement. Despite its prominence in promoting export-oriented growth in the nation, the RMG sector has a direct and symbiotic link with Bangladesh’s textile industry. Textiles have a direct relationship to RMG since it sends Work-in-Progress items along for further processing. 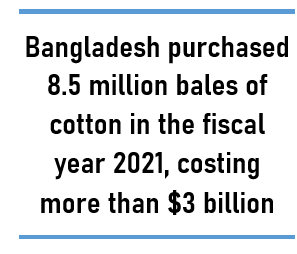 Bangladesh’s primary textiles sector is primarily reliant on raw material imports, which are then further processed. Cotton is evidently the most significant of them. India, China, the United States, Pakistan, and Brazil are the country that produce the most cotton in the world. Bangladesh is unable to produce a significant volume of locally produced cotton necessary for export demand. Bangladesh purchased 8.5 million bales of cotton in the fiscal year 2021, costing more than $3 billion. One bale weigh 480 pounds (218 kg).

The textile sector has recently faced increased competition as a result of low-cost yarn and fabric imports from India, China, and Pakistan. These nations are most likely motivated to engage in such commerce by their respective governments. When exporting to nations such as Bangladesh, China, for example, gives between 15-20% cash returns to its exporters. 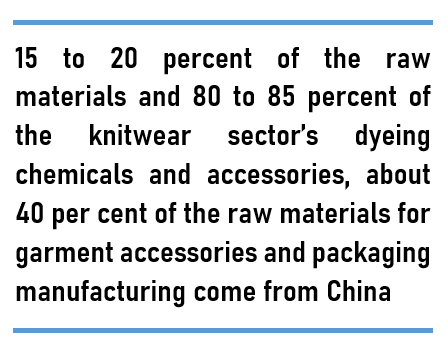 Coronavirus-related supply chain disorders were reached Bangladesh’s clothing sector with upward commodity demand. In certain situations, the prices of local stocks of goods had risen by almost 50% as supplies from China did not arrive in time. Several factory owners were pushed into the air to deliver raw materials in order to reach production deadlines. Roughly 15 to 20 percent of the raw materials and 80 to 85 percent of the knitwear sector’s dyeing chemicals and accessories come from China. And every year about 40 per cent of the raw materials for garment accessories and packaging manufacturing come from China as well. But the outbreak of the virus disrupted the supply chain and caused a raw material crisis. Again the prices of different raw materials have risen between 30 per cent and 40 per cent due to short supply. Bangladesh’s textile industry is the country’s top foreign currency earner. Lack of raw materials hampers production in several factories.

While worldwide cotton consumption continues to climb, there has been no major increase in global supply or yield in recent years. Cotton prices throughout the world are likely to reduce in the future years as a result of increased competition from synthetic fibers, which are a near equivalent. If Bangladesh continues to rely too much on yarn imports, it will be subject to similar fluctuations in demand or price instability. This, in turn, would make it impossible to achieve the long-term rise in exports that it seeks.

With the combination of the shift in focus towards synthetic fibers and the high import cost of cotton, Textiles in Bangladesh struggle to keep costs down. In the long run, Bangladesh can benefit from diversifying its sources for such a crucial raw material so as to protect itself from any sudden exogenous shocks in supply. Product diversification is a most wanted demand in today’s business in underdeveloped and developing countries. This issue becomes more desirable after the COVID-19 situation.

From table 1 we can observe that the global consumption of synthetic fibers is increasing highly.

As worldwide demand for man-made fiber grows, Bangladesh must boost the number of factories dedicated to the manufacture of man-made fiber textiles and clothing in order to enhance its exports in this area. Only 27 spinning mills in Bangladesh produce man-made yarn out of the 433 spinning mills. The mills’ output can barely fulfill 20% of the country’s demand for the commodity. Bangladesh has the chance to capture the remaining 80% of demand if it invests in the backward linking of the man-made textile value chain.

Countries like as China, Vietnam, Indonesia, South Korea, Thailand, and others are now in the forefront of man-made fiber production. According to a survey conducted by the Bangladesh Garment Manufacturers and Exporters Association, the export of clothing items manufactured from man-made fiber (MMF) from Bangladesh has been stuck around 20% for many years, despite the fact that production of such garment items has surpassed 40% globally (BGMEA). Despite being stuck at 20%, Bangladesh has the ability to pivot to the manufacture of man-made fiber-based textile and clothing, resulting in higher per unit values.

In the first few months of this year, imports of manufactured fibers increased by 45.72 percent to 99,597 tons. According to BTMA data, around 61,693 tons were polyester staple fiber, 32,454 tons were viscose staple fiber, and approximately 5,450 tons were Tencel and flax fiber, compared to 68,348 tons during the same time in 2020. Again, the Korean corporation has spent $65 million in three factories and has announced plans to invest $120 million in two other factories in Korean EPZs.

Man-made fiber is recyclable and cost-effective compared to cotton fiber and can be better alternative in terms of business. But there are some obstacles for the diversification in the spinning sector, such as-

To accommodate the increased demand for fiber and yarn, local millers have either expanded or reinvested in the primary textile industry, notably in manufactured fiber and spinning mills. Last year, Tk 600 crore was invested in the spinning sector to establish 26 new mills. Again, the Korean corporation has spent $65 million in three factories and has announced plans to invest $120 million in two other factories in Korean EPZs. The government should facilitate the import of manmade fibers, as it does in the case of cotton import, because the country does not produce cotton and manmade fibers.

Understanding the global business climate is critical for survival of the fittest. We did not meet the 50 billion RMG export objective for the current fiscal year 2021. We can’t afford to be hopeless. In the approaching year of 2022, we can perform better. To make the idea a reality, we must prepare for both the short and long term. Aside from this, the dangers posed by rivals should be evaluated on a frequent basis. However, we require a better Bangladesh, as well as a better world.