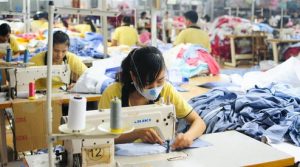 According to Vu Duc Giang, Chairman of the Vietnam Textile and Apparel Association, COVID-19  has forced Vietnam to temporarily shut down around 35% of textile and garment factories (VITAS). They expect these factories to remain closed for a longer period of time because they do not have enough funds to pay for three-on-site working arrangements in order to support employees’ return.

Moreover, he says, the vaccination rate in Vietnam’s textile and garment industry is still very low, especially in key production areas in the southwestern and southeastern provinces. Sixty two percent of the industry’s total export turnover came from these provinces in central region.

A total of $18.7 billion was exported in the first half of the year, with a goal to reach $39 billion for the entire year. In the country’s textile and garment industry, there is a lot of pressure because they haven’t been able to maintain the production situation as planned. A worker exodus from Ho Chi Minh City is also a concern for them. Du Giang warns that if they don’t return, Vietnam could face a severe labor shortage in the future.

The international smart textile market is growing at 30.4%.