This is the first operation allocated under the EIB’s €425 million South Asia Public Healthcare COVID-19 programme; the loan is covered by EU guarantees 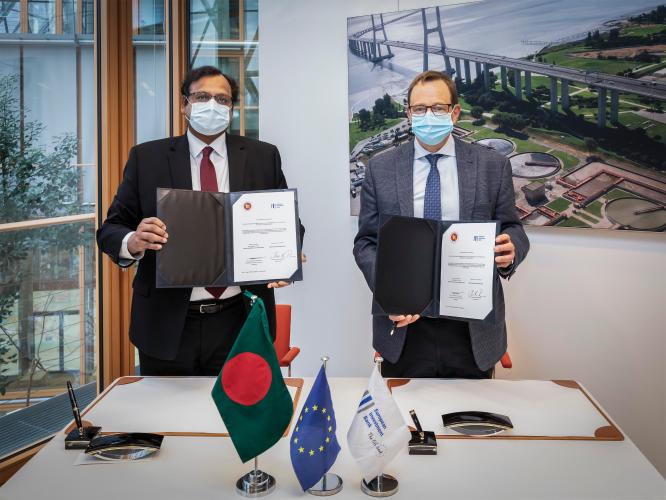 Photo: Signature ceremony between HE Mahbub Hassan Saleh, Ambassador and Head of Mission of Bangladesh and VP Thomsen.

The European Investment Bank (EIB), the bank of the European Union and the largest multilateral lender in the world, will provide €250 million to the People’s Republic of Bangladesh to support procurement of safe and effective vaccines and country-wide immunisation against COVID-19. Vaccination efforts will also include Rohingya refugees from Myanmar currently hosted in Bangladesh. The financing will help Bangladesh to mitigate the health effects of the coronavirus pandemic and enable the country to strengthen its healthcare system and protect its people from COVID-19 with effective vaccines. These are all key preconditions for continued sustainable economic and social growth.

This is the first operation allocated under the €425 million South Asia Public Healthcare COVID-19 programme approved by the EIB in 2021. This programme aims to provide long-term support for COVID-19 vaccination, pandemic preparedness and health system resilience in Bangladesh, the Maldives and potentially other countries in South Asia.

EIB Vice-President Christian Kettel Thomsen, who is responsible for operations in South Asia, said: “The EIB is very proud to expand Team Europe support for Bangladesh, ensuring its people are protected from coronavirus with effective vaccines. Together with the €1.3 billion in EIB support already extended to the COVAX vaccine-procurement initiative, operations like these are a key step in accelerating global immunisation and a quick and effective victory over the virus. At the same time, this operation underlines our strong, long-term commitment to working with other members of Team Europe and the Government of the People’s Republic of Bangladesh to ensure a safe, green and sustainable future for Bangladesh and its people.”

Ambassador of the People’s Republic of Bangladesh to the European Union, H.E. Mahbub Hassan Saleh, said: “The EIB’s loan of €250 million to the Government of Bangladesh for procuring COVID-19 vaccines is the biggest and most significant development in the 22-year long journey of the Bangladesh-EIB partnership. The footprint of the EIB in Bangladesh is becoming larger and expanding into new areas, which would continue in the days ahead and contribute to greater socioeconomic development in the country. Climate change, infrastructure and renewable energy are some key areas of importance to Bangladesh and the European Union, where the EIB’s involvement can be robust in the coming days.”

EU Ambassador to the People’s Republic of Bangladesh, H.E. Charles Whiteley, said: “The substantial support from the EIB that is being confirmed today marks a very welcome addition to the Team Europe partnership with Bangladesh to fight the pandemic. EU relations with Bangladesh are expanding in so many fields: from climate change to business, from connectivity to people-to-people relations. This commitment in the health sector is a further signal of the strengthening of our ties.”

The operation is covered by the EU EFSD+ Comprehensive Guarantee and its Neighbourhood, Development and International Cooperation Instrument (NDICI).

Since the beginning of the coronavirus pandemic in 2020, the EIB has been providing long-term financing to support national healthcare systems, including to accelerate local vaccine deployment in countries throughout the world. The EU bank has been supporting vaccine research and production as well as COVID-19 diagnosis and treatments.

With EIB innovative cost-sharing financial instruments and contributions from the European Commission and EU countries, Team Europe has committed more than €3 billion to COVAX, the largest vaccine procurement and supply operation in history of the world. Today, Europe is exporting more vaccines than any other region in the world, with the EIB actively supporting build-up of vaccine production capacities in less developed regions across the globe.

In January 2022, COVAX delivered the 1 billionth COVID-19 vaccine dose, following distribution of the life-saving vaccines to some 144 countries.

As part of its global COVID-19 response in 2021, the EIB Group increased its financing for the health and life sciences sector to almost €5.5 billion, with €1 billion invested into health and life sciences funds. Overall, more than 780 million people around the world will benefit from improved health services, including COVID-19 vaccines, made possible by EIB financing.

Last year, the EIB Group provided €8.1 billion of financing to projects in more than 160 countries outside the European Union including Bangladesh, bringing the total amount of investments outside the EU to more than €1.5 trillion.

In January 2022 the EIB announced establishment of EIB Global, its branch dedicated to international partnerships and development finance. EIB Global will bring together all of the EIB’s resources and expertise gained outside the European Union under a clear management structure that can make a stronger, more focused contribution to Team Europe projects and initiatives.

The first regional hub of EIB Global opened in Kenya’s capital Nairobi, with more offices planned as the EIB strengthens its presence in developing countries, including offices in Jakarta, Indonesia and Suva, Fiji.