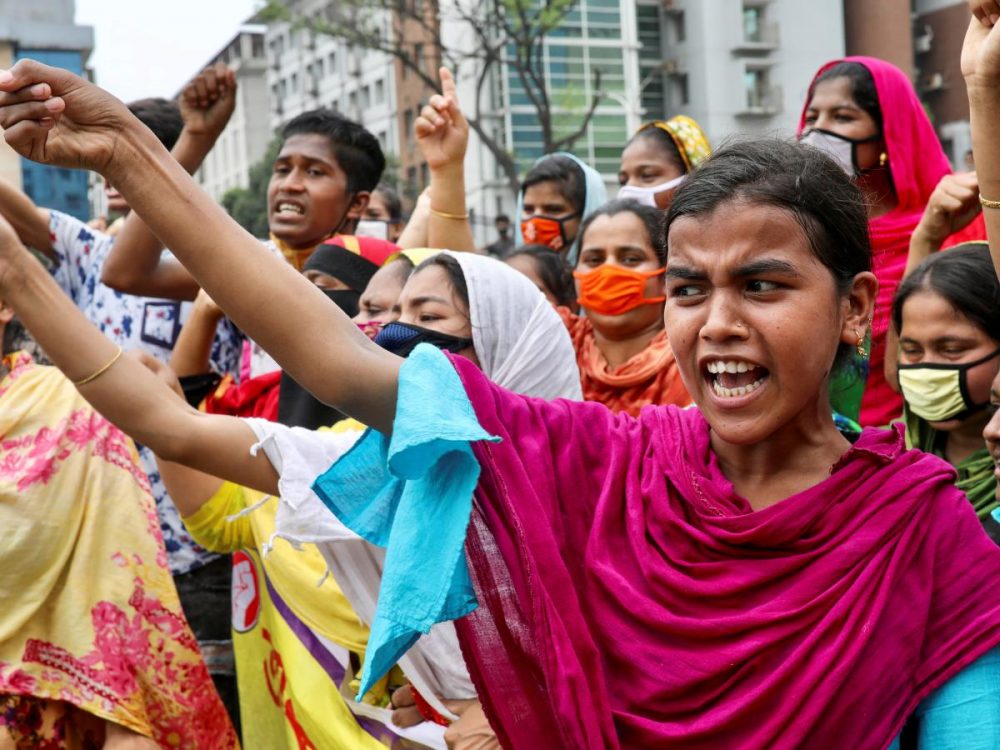 Women working in the Bangladesh garment industry have been heavily affected by the Covid pandemic and the associated disruptions in the sector, according to the findings of an international study published today.

The research, which sets out a series of industry and government policy recommendations, focused on the experiences of Bangladeshi workers employed in the ready-made garment (RMG) industry which supplies clothing and fashion products to multinational companies across the Global North, including many well-known UK High Street brands.

The study, published by researchers at the University of Aberdeen and trade justice charity Traidcraft Exchange UK, shows that the immediate impact of Covid-19 and some of the actions taken by retailers – such as cancelling orders, refusal to pay for work in progress and demands for discounted prices – disproportionately impacted the vulnerability of women workers by contributing to an increase in gender violence, abuse and economic hardship.

It found the pandemic exacerbated interrelated vulnerabilities in economic, job, food and housing security, as well as health and wellbeing, with women workers struggling to support themselves and their families.

The RMG industry is the mainstay of the Bangladesh economy, accounting for 85% of export earnings, about 20% of GDP and directly employing about four million workers, with more than 12 million people in total dependent on the sector.

The in-depth research saw face to face interviews carried out with female and male garment workers, factory managers, industry leaders and trade unions over the course of eight months between November 2020 and July 2021, as well as discussions with a number of development agencies and international advocacy NGOs.

It found that some employers refused to let workers return after lockdown. Most who did return said they had been forced to sign new contracts, losing access to benefits and protection they had previously accrued.

The research also found an increase in intimidation and threats, physical and sexual violence, and restriction of movement. Legal protection for women workers meanwhile is limited, as are the grievance mechanisms in place. Those which do exist were said to be often disregarded with impunity by many factory owners and managers.

Compliance audits carried out by companies were found to be largely ineffective, with around 20% of social compliance auditors not including women’s equal rights issues in their audits, and 40% not auditing the right to trade union recognition.

“The majority of workers in the RMG industry in Bangladesh are women who are young, poorly educated and from rural areas with few alternative employment options. They are especially vulnerable to exploitation,” said project lead Muhammad Azizul Islam, Professor in Sustainability Accounting and Transparency at the University of Aberdeen Business School.

“During pandemic time, workers could not afford to be sacked. These devasting impacts were heightened and, in some cases, directly caused by retailers and brands selling into the UK and other markets in the Global North.”

Bangladesh is rated as one of the 10 worst countries on the Trade Union Confederation’s Global Rights Index and is ranked 171 out of 190 countries on the World Bank’s Women, Business and the Law 2021 Index, which captures the legal and regulatory environment for women working in the formal sector compared with that for men.

A unique collaboration between business researchers, social science scholars and social and civil society organisations, the research has identified a number of policy recommendations for Bangladesh and UK Governments, as well as Bangladeshi manufacturers and UK retailers.

These include reviewing and revising the legal framework for protecting the rights of RMG workers and creating a UK fashion watchdog, similar to an existing UK supermarket watchdog for grocery supply chains, to tackle abusive purchasing practices by brands selling into the UK market.

“UK retailers and brands should consider only sourcing products from suppliers with policies and mechanisms in place that protect workers’ rights and address gender harassment, abuse and gender discrimination. They should also require independent audits, covering both manufacturers and sub-contractors, to include this as a priority,” added Professor Islam.

Fiona Gooch, senior private sector policy advisor with Traidcraft Exchange UK said: “UK fashion brands’ purchasing practices are among the most abusive and least regulated in the world. A key recommendation in this report is that the UK set up a fashion watchdog to stop abusive practices in their supply chains. This would help protect garment workers in Bangladesh and other countries, including the UK, from having to risk working in abusive and unsafe situations, where conditions sometimes resemble slavery.”

The project was funded by the Modern Slavery and Human Rights Policy and Evidence Centre (Modern Slavery PEC) through the Arts and Humanities Research Council (AHRC) as part of the funding call for research on the impact of the Covid-19 pandemic on modern slavery.

Professor Alex Balch, Director of Research at the Modern Slavery PEC, said: “This research adds to other evidence published by the Modern Slavery PEC and others and confirms that the pandemic has particularly affected already vulnerable groups. Businesses and governments need to do more to address particular risks that women face in the garment industry, often producing clothes sold on high streets across the world.”

High Plains of Texas to Have Bigger Cotton Crop

JCPenney introduces Forever 21 as the latest addition to its portfolio

US to source from China more