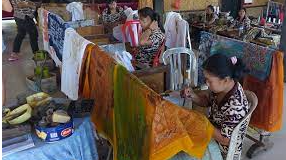 Indonesia’s textile exports declined considerably during H1 FY2021 on an annual basis (Y-o-Y). Data from the Industry and Trade Office of the Province of Bali shows, during the first half of 2021, the value of Indonesia’s textile exports decreased by 47.93 percent Y-o-Y in meters. Ni Wayan Lestari, Head-Foreign Trade, Bali Province Industry and Trade Office believes, this decline to be a result of the falling foreign demand. This decrease in demand was also followed by an increase in ship loading prices due to the scarcity of export containers, reports Indo Textiles. Meanwhile, nationally, the textile and textile product industry is still in a difficult condition. The Central Statistics Agency (BPS) recorded a 4.54 per cent Y-o-Y decline in textile and apparel exports during Q2 FY 2021 minus 4.54 percent yoy.