There is no such thing as a good time to get involved in war, yet the present time is absolutely hostile. The world is now going through a transition due to the ongoing epidemic. For more than two years, the global economy was almost completely paralyzed by the effects of the novel Corona virus (Covid-19), during which the bankruptcy of countless businesses had adversely affected the national economy. In 2020, the world’s gross domestic product fell 3.4 percent. As the world prepares to turn around at a slower pace, the Ukraine-Russia war will slow down. 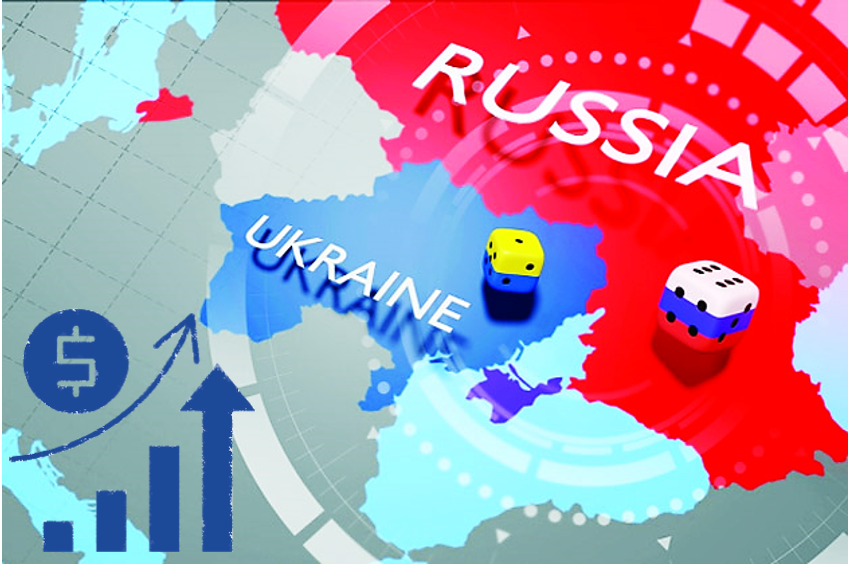 The entire world economy, including Bangladesh, is currently at risk due to this war. To understand the matter, one must first know how this war started and how the international situation became so murky. Russian President Vladimir Putin declared the two regions of eastern Ukraine, Luhansk and Donetsk, independent states on February 24 this year as part of his long-running effort to occupy Ukraine, and launched a military offensive there. Following this, the European Union, the United States, the United Kingdom, Canada, Japan and several other countries took the toughest initiative ever to suppress Russia. They have banned some of Russia’s leading banks from using SWIFT. Because, Russia completes 4 lakh transactions every day through this SWIFT. The SWIFT or Society for Worldwide Interbank Financial Telecommunication is an international payment messaging system used in 200 countries, which informs the sender and receiver of any international financial transaction information via message. After SWIFT, VISA and MasterCard also shut down Russian economic transactions and Maersk, one of the world’s largest shipping companies, stopped bringing goods to and from Russia. The United States has said it will no longer buy oil from Russia, and the European Union has banned Russian aircraft from flying over its territory. Then Russia also took some counter measures. They banned aircraft from 32 countries, including the European Union and Canada, from using Russian airspace. On March 15, the European Union imposed another new pile of sanctions.

Now the question is, what happens to Bangladesh because of their so many sanctions and the international situation is clouded? In fact, these sanctions are affecting Bangladesh in many ways. As a result of this war between Russia and Ukraine, rising the oil prices will have an effect on world trade and economy. Traders say cargo ships no longer want to go to the Black Sea because of the war.  As a result, exporters are also worried. In the wake of the attack on Ukraine, several countries, including the United States, the European Union, and Japan, have imposed sanctions on Russia, most of which are economic. According to the Export Promotion Bureau, in the fiscal year 2020-2021, Bangladesh exported goods worth US USD 665.3 million to Russia, of which readymade garments were the most.  Imports amounted to USD 466.7 million, most of which were food products. In the previous year, Bangladesh exported goods worth USD 487 million to Russia, while imports amounted to USD 782 million. One-third of the demand for wheat in particular comes from Russia and Ukraine, about 20 percent of total maize comes from these two countries. Now the following is an explanatory discussion of what could happen if this war escalates further, i.e., what effect it could have on Bangladesh.

Here’s a Look at How World Economy Can be Impacted by this War:

First of all, let’s talk about the garment industry. Recently, Russia is being considered as a new market for garment exports. In the fiscal year 2020-2021, Bangladesh exported goods worth USD 665.3 million to Russia, of which readymade garments were the most. On the other hand, more than half of the garment sector of Bangladesh or 64% of readymade garments are exported to Europe. It is said that one out of every 3 denim or jeans used in Europe is made in Bangladesh. Now the question is, what has this war got to do with the export of goods from Bangladesh to Europe? Let’s clear up the matter.  Now suppose Russia stops exporting oil and gas to Europe for some reason, then the European economy could go into a recession. This will reduce the purchasing power of Europeans and reduce the price and number of new order garments given to them in Bangladesh. As a result, the garment business in Bangladesh may collapse again. Bangladesh’s garment manufacturers are also worried about rising oil prices, as ship fares are rising and production costs are rising at the price at which they have ordered garment exports. Due to the increase in distance due to the ban on shipping and air, the cost of transporting goods to Asia or from Asia to different countries of the world may increase a lot.

As the world’s two largest wheat suppliers became embroiled in war. Only Ukraine and Russia account for 30 percent of world’s wheat exports, 19 percent of corn and 80 percent of sunflower oil, which is used in various food processing. All wheat suppliers in the world raised their wheat prices, which will also affect Bangladesh’s economy and this price may increase further.  Bangladesh bought wheat from the international market at USD 334.50 per ton in January 2022, which stood at USD 353 in March.

Bangladesh needs about 2 million tons of edible oil per year.  Of this, 2 to 3 lakh tons are produced in Bangladesh. The rest, that is, 90 percent of the demand is met from imports. Bangladesh buys oil seeds from Russia and Ukraine, albeit in small quantities. However, most raw soybeans are bought from Argentina, and soybean seeds are bought from Brazil. Soybean seed prices in the international market rose to USD 660 per ton in February due to lower soybean production in these South American countries due to dry weather in the last few months. In the international market, which was 606 in January. Soybean oil prices in January were USD 1,470 per ton, which came to USD 1,596 in February. On the other hand, Indonesia, the largest producer of palm oil, has banned the export of palm oil and fears that the Ukraine-Russia war will cut off the flow of sunflower oil from Ukraine and neighboring countries. The price of palm oil, which was USD 1,345 per ton in January, which came to USD 1,522 per ton in February. Due to soybean and palm oil prices, people in many regions of Bangladesh and India started using mustard oil, which was later increased by the syndicators.

At the time of Corona’s arrival, the price of Brent crude oil at $50 per barrel in the international market touched $139 on March 5, 2022. With that, energy experts and economists say, it could go up to $200. However, on March 15, the price fell below $100 for the first time in three weeks. Experts say there are several reasons for this reduction.  After the war in Ukraine, oil-producing countries other than Russia, such as the United States and the Middle East, increased their oil production. At the same time, China, one of the largest importers of oil, has seen a resurgence of the corona, which has led to a new lockdown. As a result, the supply of oil in the market has increased a bit. If the price of oil continues to rise, it will cause a catastrophe in Bangladesh. Because then the government of Bangladesh will have to give more subsidy or increase the price of oil in the market of Bangladesh.

Russia is a major exporter of natural gas. Economists fear the war could push up natural gas prices. Only Russia supplies 40 percent of Europe’s total natural gas demand. In addition to Russia, Norway, Algeria and Azerbaijan also supply gas to Europe.  Germany, Europe’s largest economy, imports 65 percent of its natural gas from Russia, on the other hand Italy imports 43 percent and France 16 percent. Russia supplies the lion’s share of the natural gas demand of other small European countries, the German Czech Republic, Hungary, Poland and Slovakia. So, if Russia intervenes in the supply of gas and fuel oil, the European economy will face an extreme energy crisis. There is a connection between the rising cost of electricity and the rising cost of oil. If the supply of oil and gas from the international arena is disrupted, power plants in Bangladesh will suffer the most. The government has subsidized the power and energy sector to the tune of Tk 70,000 crore in the last 11 years. In the last one year alone, it has subsidized Tk 11,000 crore, which is more than the direct agricultural subsidy (BDT 9,500 crore). As a result of the Ukraine aggression, rising oil and gas prices, increased collective subsidies in the power sector, along with the cost of capacity charges.

Experts say that the increase in prices in so many places in the international arena will further increase the import cost of Bangladesh. Bangladesh imports more than it exports. In the first half of 2021, the gap between imports and exports widened to a record USD 8.0 billion. Now, as a result of rising prices in the international market, the import cost of Bangladesh will increase further and this deficit will increase further and the value of money against the dollar will decrease further. Above all, the prices of import dependent products can go up a lot in Bangladesh.

Global transport has already been severely disrupted since the epidemic, so this war could create more problems.  Transport mode may be affected by sea shipping and rail freight, although rail carries a small proportion of total cargo between Asia and Europe, it has played a significant role during the recent transport disruptions and continues to grow.  Countries such as Lithuania could severely affect their rail traffic due to sanctions against Russia.

The world’s unexpectedly strong recovery companies from the epidemic recession are struggling to find enough raw materials and ingredients to produce products to meet the growing customer demand.  Overwhelmed factories, ports and freight yards meant shortages, shipping delays and high prices.  Sanctions on Russian and Ukrainian industries could delay a return to normalcy.

The automobile sector is expected to be severely affected by the war.  Rising oil prices, persistent shortages of semiconductors and chips and other rare metals could exacerbate the industry’s woes.  Also, Ukraine is home to many companies that make car components for automakers.  According to a report in the Wall Street Journal, Leoni AG, which supplies Ukrainian-made cable systems to European auto companies, has closed two of its factories in the country.
In today’s world of globalization, it is not just a matter of which country is doing business with which country. If the price of a product goes up in the world, it has an effect on all the countries that use it. Bangladesh has had close relations with Russia since the war of independence. Large projects like Ruppur Nuclear Power Plant and Bangabandhu Satellite-2 are being implemented with the help of Russia. However, Bangladeshi officials do not fear that the recent sanctions on Russia will have any effect on these projects. Diplomats say sanctions on Russia, a global superpower, will have repercussions on countries around the world. If the crisis lasts longer, diplomatic pressure may also be put on Bangladesh. When war breaks out, it creates multifaced problems, not just between the two countries or alliances, everyone is affected. That is, even if the war is local, its curse is global. In this situation, the government has to generate a platform to reduce tariffs to reduce the price of goods by ruling the expenditure. Reducing tariffs will further reduce earnings/profits and increase the budget shortage, so on the one hand it is necessary to bring effectiveness in project execution, on the other hand it’s necessary to prevent both increase in expenditure and waste. Else, high affectation, high energy prices, tougher foreign i.e., international supply situation could generate unwanted horrors in the economy.