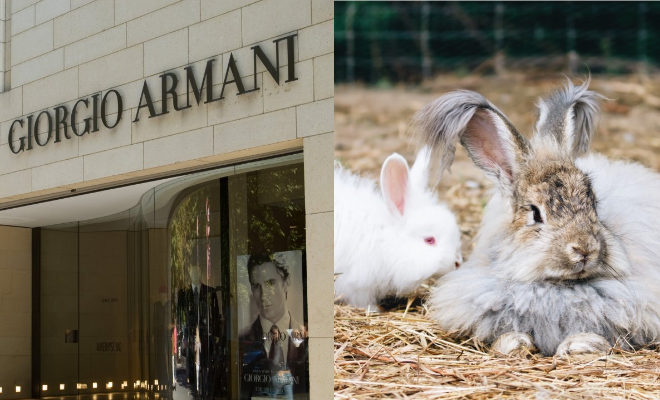 Under pressure from animal rights organizations and more ecologically concerned customers, the Italian  luxury house Armani has added angora wool to its list of prohibited materials under its fur-free policy, joining a growing number of businesses that have banned the ultra-soft wool derived from live rabbits. After banning animal fur in 2016 and signing the Fashion Pact with other key industry leaders to fight climate change in 2019, Armani’s action is yet another step toward sustainability. Sweaters, hats, gloves, and other items are made from angora rabbit fur. The fur of Angora rabbits is long and silky. The majority of angora originates from rabbits raised on industrial farms in China. Workers tie the rabbits down and tear their fur out as they struggle in anguish. Angora wool has been phased out of garment lines like Calvin Klein, H&M, Marks & Spencer, Tommy Hilfiger, and Topshop. Angora has been prohibited by over 300 major stores thus far. After that, there’s mohair. South African farms produce the majority of the world’s mohair. Shearers toss angora goats, hack off swathes of their skin, and slit the throats of sentient animals. Workers take up goats by their tails, causing them to break. One farmer threw rams into cleaning solution tanks and pushed their heads into the liquid, which would poison them if consumed.