Home » News & Views » Research says, “almost 357 thousand of 4.1 million garment workers have lost their jobs because of the pandemic”

Accordingly, almost 357 thousand of 4.1 million garment workers have lost their jobs because of the pandemic according to a recent study conducted at 610 factories in Bangladesh, says Apparel Resources The average number of employees per factory dropped from 886 to 790 between December 2019 and September 2020, as identified by researchers from the Bangladesh Center of Policy Dialog and Mapping. According to the report, some 232 plants comprising 6.9% of Bangladesh’s total facilities shuttered down under the pandemic titled ‘Vulnerability, stability and regeneration in the RMG Sector in view of the COVID pandemic: Enterprise Survey results.’

Investigators also found that, in the process of their outbreak, more than 59 percent of the 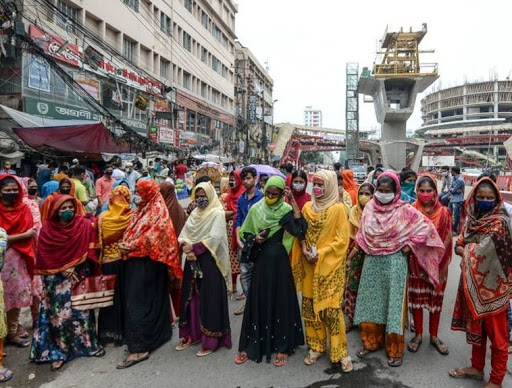 plants were also new workers and the recruitment rate at Dhaka and Gazipur was identified as high. In the COVID-19 epidemic, as many as 37 percent of factories re-secured and recruited employees typically rehired with decreased salaries, lower contracts and losses of income.

Moreover, most textile plants did not conform with labour laws and regulations when employees were laid off or discharged, researchers said. Just 3.6% of the facilities examined agreed with the pay principle, which means that the researchers paid wages, insurance and cleared duties. About 70% of the plants paid only wages. Failure to comply, they said, was significantly higher in Narayanganj’s big factories and plants. While the total composition of the industry has not changed significantly, about 33 percent of manufactures employ a lower post-outbreak share of women’s employees, it has been concluded that women are overwhelmingly impacted by the pandemic, according to the evaluation by the International Labor Organization.

The study also showed that most factories, including major corporations, had no strategy or financial resources to help them deal with the imminent crisis. Just 44 percent of the factories surveyed said they trusted job orders in April.