Rieter posted an order intake of CHF 975.3 million, which corresponds to an increase of 289% compared to the previous year period (first half of 2020: CHF 250.7 million). The recovery is broadly supported globally and is based on a catch-up effect relating to the years 2019 and 2020 and a regional shift in demand. Rieter is benefitting from its innovative product portfolio and the company’s global positioning. The highest order intake was recorded in Turkey.

A key driver of growth in the machinery business has been the demand for innovative complete systems in the areas of ring and compact spinning. The successful commercialization of the compacting devices and the piecing robot ROBOspin, launched in 2019, contributed to the increase in the Business Groups Components and After Sales.

The Rieter Group recorded sales of CHF 400.5 million (first half of 2020: CHF 254.9 million). Sales significantly increased compared to the previous year period; however, as expected, they were still impacted by the low order intake of the financial year 2020.

In the first half of 2021, the Business Group Machines & Systems realized sales in the amount of CHF 218.9 million, which corresponds to an increase of about 83% compared to the previous year period.

In the Asian countries, Rieter recorded sales of CHF 137.0 million (+57%) for the first half of the financial year 2021. In China, sales rose by 85% to CHF 68.5 million due to spinning mills investing in the improvement of their competitiveness. The recovery of the market in India resulted in a significant increase of 188% to CHF 51.0 million. In Turkey, sales improved slightly to CHF 59.8 million (+17%). Sales increased by 94% to CHF 59.8 million in the region North and South America, driven by a considerable increase in demand in Latin America. 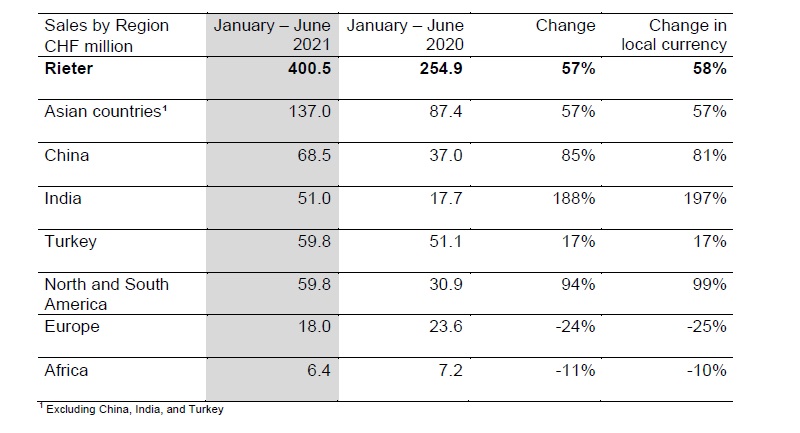 In terms of EBIT, Rieter posted a profit of CHF 9.0 million for the first half of 2021 and a net profit of CHF 5.3 million. A one-off effect associated with the reversal of allowances for machinery that was delivered in the first half of 2021 contributed to this development. Free cash flow amounted to CHF 53.2 million, which was considerably influenced by the advance payments received from customers in conjunction with the significantly increased order intake.

In recent years, Rieter has consistently implemented its strategy based on the cornerstones of innovation leadership, strengthening the components, spare parts and services businesses, and adjusting cost structures.

Crisis management in the pandemic year of 2020 was aimed at protecting employees, fulfilling customer commitments, ensuring liquidity, and also strengthening the market position for the time after the pandemic as well as retaining the ability to benefit from the incipient market recovery.

The focus for 2021 remains on the implementation of this strategy. The measures for crisis management relating to the protection of employees and fulfilling customer commitments are still in effect in countries that continue to be affected by the pandemic.

As already announced, the first half of 2021 has been characterized by a strong market recovery in combination with a regional shift in demand for new machinery and systems. Rieter anticipates a normalization of the demand for new systems in the coming months. The company assumes that spinning mills will continue to work at high-capacity levels.

For the full year, Rieter expects sales to be above CHF 900 million.

The realization of sales from the order backlog continues to be associated with risks in light of bottlenecks in material deliveries and freight capacities as well as the ongoing pandemic in key markets for Rieter.