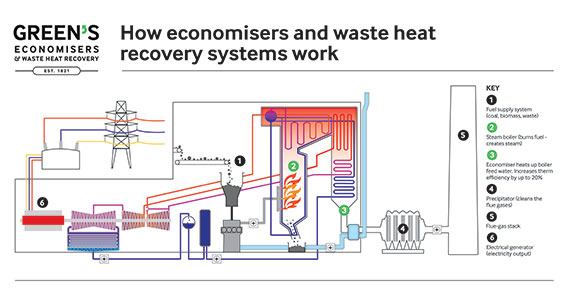 New heat recovery methods are being used by large spinning, dyeing, washing, and weaving mills to capture and reuse waste heat energy from the plants’ gas burners. Mills in Bangladesh are catching waste heat energy to boil water, run air conditioning, and other uses, according to the Daily Star, saving both energy and money. The waste heat recovery system provides a cost-effective and environmentally friendly way for textile manufacturers to save energy. The method, according to the International Finance Corporation’s (IFC)  initiative, reuses waste energy from industrial operations rather than releasing it into the environment. The recovered heat can be used to generate electricity and steam on-site, as well as preheat combustion air. According to PACT, over 335 enterprises are implementing waste recovery systems, which have lowered yearly gas usage from 1,291,122 cubic metres to 1,274,983 cubic metres.

Wherever captive power units are used, steam may be generated for a variety of other purposes, such as chillers, dyeing, and providing hot water, which would normally necessitate the use of additional gas, he added. Overall gas consumption efficiency in these businesses ranges from 81 to 86 percent. The efficiency of combined cycle power plants is greater, ranging from 47% to 52%, according to A Matin Chowdhuy, Managing Director of Malek Spinning Mills. Chowdhury said he has been saving money by capturing waste heat energy from gas usage in his three factories in Shafipur, Gazipur: Knit Asia, Salek Textile, and JM Fabrics. At Knit Asia, he manufactures 50 tonnes of fabrics each day for garment production.