This article describes the chemistry of binders and their action in pigment printing of cotton textiles. Printing of textile materials is probably best described as an industrial art, having a long history and an assured future. Textile printing is the most versatile and important of the methods used for introducing color and design to textile fabrics. In pigment printing, insoluble pigments, which have no affinity for fibers, are fixed on to the fibers with binding agents or binders. In textile printing, dyes or pigment are transferred to textile fabric by printing pastes. Binders are the mechanism used to keep the color on the fabric when using pigments for printing textiles. The choice of binders will always depend upon the final fastness requirements as well as the cost requirements of the process. This paper review gives more emphasis on the need and functions of binder in pigment printing and also the chemistry of binders and its action in fixation of the pigment onto the textile substrate. 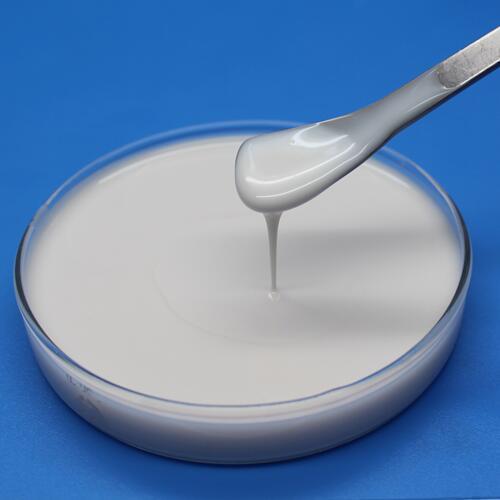 Binders are chemical products that binds the pigments with the cellulosic fibers in textile pigment printing. Almost all the binders used in textile pigment printing are the addition polymerization products. It is a film forming substance made up of long chain macromolecules, which when applied to the textile together with the pigment, produce a three dimensionally network. Different binders were also developed for the purpose, resulting finally in the use of water- in-oil, and oil-in-water emulsions. This greatly accelerated the use of pigments in textile printing and then pigments have become major coloring matters used in printings. 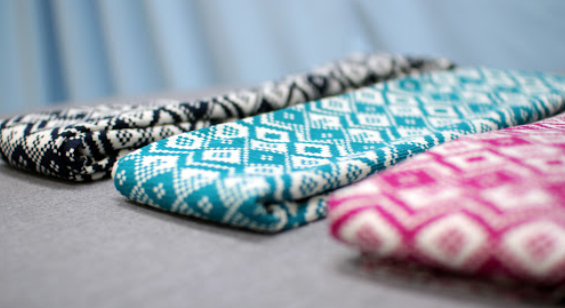 Currently, pigment printing is perhaps the most commonly and extensively used technique for printing textiles. In pigment printing, insoluble pigments, which have no affinity for the fiber and fixed on to the textile with binding agents in the pattern required. This description is perhaps oversimplified, but it does obviously set pigments apart from dyes that are absorbed into the fiber and fixed there as a result of reactions specific to the dye. Printing paste is the main constituent of printing which enables the formation of the predefined patterns. The printing paste for pigment printing generally contains pigments, emulsifiers, binders, softeners, thickeners, antifoaming agents, and crosslinking agent.

However, pigment printing has a few problems –relatively high temperature cure, stiff hand and poor crock fastness of printed goods. These disadvantages are related to binder used. Thus, to improve the quality of pigment goods, the overall properties of the binders need to be improved. Methods to lower the curing temperature have received the most attention because the high temperature cure process not only wastes energy but also runs the risk of destroying substrates that can’t endure high temperature processes.

Binder Classification and Its Function

In general binders for textile printing are classified into two as reactive and non-reactive. Non-reactive binders do not contain reactive groups. Due to the absence of reactive groups they do not self – crosslink during fixation or curing. Thus addition of fixing agent is required to form a stable binder film on substrates. Reactive binders contain reactive groups usually from copolymerization with monomers such as N-methyl acrylamide or similar compounds. These binders are able for self-crosslinking and form stable film during fixation. 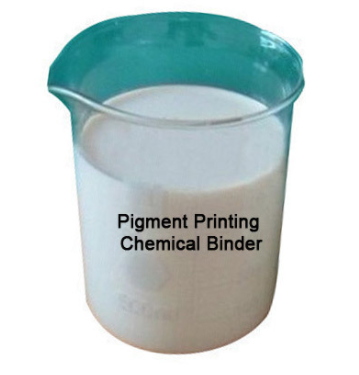 Binders are typically added to printing paste in order to:

Binder used in pigment printing must have certain qualities. Binder should not get coagulated due to shear forces operating during printing. If coagulation takes place clogging of the screen and blocking of the engravings of the printing rollers take place during the actual printing. The binder film must be clear, of even thickness, smooth, and neither too hard not soft. It should be elastic in nature, should have good adhesion to the substrate without being tacky. It should have good resistance to chemical and mechanical stresses and should be readily removable from the engravings of the printing rollers, screens, back grays and blankets. Among these properties, one can be improved at the cost of others. Good binders must be colorless, odorless compounds that are easily and smoothly dispersed in print pastes without adversely affecting the viscosity and are easily removed from printing equipment, such as screens and rollers. Binders should form flexible films that encapsulate pigment particles and adhere to fabrics without swelling during laundering and dry cleaning.

Textile binders are necessary to form a matrix to entrap the pigment particle and must be stable to outside forces that would tend to dislodge the pigment from the textile substrate, such as washing or rubbing. A binder must lend itself to application and have other characteristics to enhance the coloring effect of the pigment. Since pigment coloration is an additive effect to the substrate, the components of this addition will tend to change the feel of the substrate of the fabric.

Most pigment printing binders on the market are macromolecule copolymers that are formed by emulsion polymerization processes from vinyl based monomers. They contain hydrophilic sections, which make them dispersible in print paste formulations and side chain functional groups, some of which are capable of forming films by crosslinking reactions. Crosslinking is the “glue” that gives structure to binder films which encapsulate and here the pigments to fabrics. Functional groups which usually do not form crosslinks are methyl, ethyl, and butyl acrylates, acrylonitrile, styrene, and ethyl groups, while the groups that react to form crosslinks are acrylamide, methylolacrylamide, hydroxyl ethyl acrylate, acrylic acid, meth acrylic acid, and fumaric acid. Many of these groups are hydrophobic and help prevent swelling of the print paste in water. 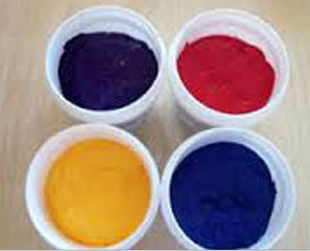 The use of chemically modified wheat gluten as a binder in pigment print pastes for textiles was investigated that the performance properties needed in textile pigment printing binders for apparel and interior applications could be attained by economical methods of chemical modification. This study improved solubility in alkaline solutions and technical properties resulting from chemical modification of gluten for paper binders. Wheat gluten is composed of two water insoluble proteins found in wheat flour, glutenin and gliadin. Glutenin molecules have linear configurations and the potential to form disulfide and other crosslinks. Gliadin consists of small globular molecules, is soft and has good adhesive properties.

The crocking fastness properties of pigment printed fabric is less than the crocking fastness of the reactive printed cloth, because of insolubility of pigments. However, the crocking fastness can be improved by selecting the appropriate binder. investigated that some novel prepared aqueous oligomers (binder)of polyurethane acrylate based on either polyethylene glycol or glycerol ethoxylate-co-propoxylate having zero volatile organic compounds can be used safely for preparing printing paste for screen printing of all types of textile fabrics using pigment dyes. The highest color strength (K/S) is obtained and the fastness properties range between good and excellent for samples printed using polyurethane acrylate based on glycerol ethoxylate copropoxylate, this is true irrespective of the type of printed fabric. The lowest K/S is obtained in case of using Ebecryl 2002 as a commercial binder. The binder of PUA based on PEG2000 gives K/S better than the binder of PUA based on PEG1000+2000 for all the types of printed fabrics unless in case of printed wool, the inverse is true.

Again, the rubbing fastness of polyester fabric depends on binder elasticity, adhesion on the textile materials, and uneven dispersing of the pigment in the print paste. The binder was well dispersed and had the same elasticity; these results indicated that plasma treatment improved the fabrics adhesion to printing paste and also binder. The rubbing fastness results can be attributed to better binder film strength of plasma treated fabrics than untreated fabrics. After plasma treatment, amount of linkage between binder and fibers and resistance of the chemical bonds increased because of increasing polar groups.

Action of binder in pigment fixation 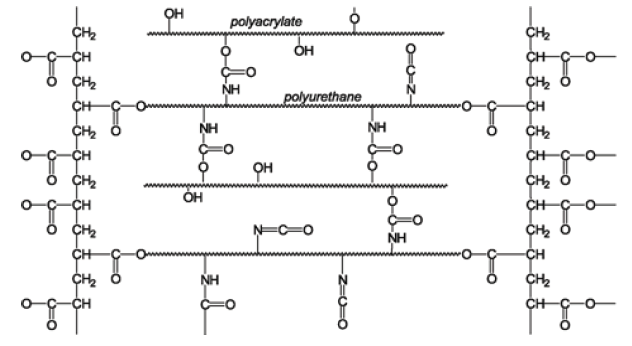 The difference between dyeing processes and pigmentation is that pigment colored textiles require a curing procedure. Since pigments do not have an affinity to textiles. Pigment fixation on textiles relies on binders that require a curing process to hold the pigments on a textile. Conventional curing is a thermal process where pigment colored textiles must be dried and then cured with heat to convert the soft organic base (monomer and/or oligomer) to a tough polymer. UV curing is an alternative to the thermal process. UV curing resin formulations content oligomers, monomers, and photo initiators. These components can be polymerized (hardened) by the free radical mechanism using of a photo initiator triggers a nearly instantaneous curing reaction upon exposure to UV light. Thus UV curing produces a completely polymerized network in seconds and is faster than thermal curing. UV curing for pigment printing has been studied, Problems associated with the process include low crock fastness, stiff fabric hand and low curing efficiency of the resin when pigments are involved. Printing with pigment dispersed in radiation curable liquid compositions and curing with ultraviolet eliminates the drying step and greatly reduces the energy required for curing. High curing speeds, high cross-linking densities and the absence of organic solvents have made UV curing a well-established technology for all kinds of coating and ink applications.

Today numerous UV-curable monomers and oligomers like polyether, polyester, epoxy, polyacrylate and urethane acrylates are available. By the choice of raw materials namely oligomers as binders and accompanying monomers, and photo initiators the film properties such as hardness, flexibility, resistance and adhesion can be controlled in a very flexible way. The fastness properties of the prints depend on the type of binder used as well as the type of the selected textile fabric. Both concentration and type of the binders affect the color strength of the UV cured prints.

The development of pigment printing over the last 50 years”. Review of progress in coloration and related topics